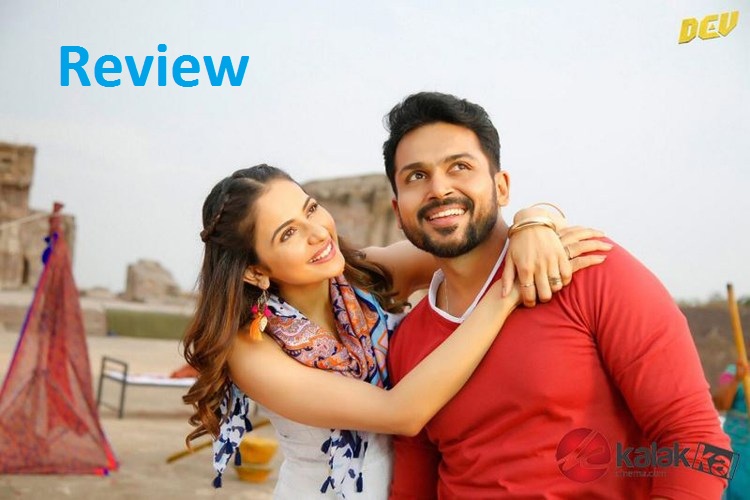 Dev promises us to take on an adventures romantic ride having released on Valentine’s Day. Let’s see if it keeps it up. Its a challenging role for Karthi as he said in the film’s event and Rakul Preet is making a comeback kind of. Let’s see how far the Khakee pair entertains us.

Dev (Karthi) is an adventure junkie and a travel photographer. He often sets on road expeditions with his buddies in craving for adrenaline rush. Dev’s doting and caring father Prakash Raj is worried with his fearless adventurous life. Dev meets Meghana (Rakul), an energetic entrepreneur and falls in love with her. Dev had to save a girl (Nikki Galrani) from goons due to which he lands in troubles.

Dev proposes to Rakul and she reciprocates. Meghana’s mom Ramya Krishna sets conditions. Dev sets on a biggest adventure of his life. What happens to their love story? What problems does Dev face? Why did he go in pursuit of a dangerous adventure? Curious to know? watch Dev on big screens.

Dev is a simple romantic film with some stunning visuals. Narration is plain that the film neither have surprising twists nor do have a strong conflict point. It is pretty predictable and boring after a point. The film is neither emotionally backed nor is entertaining. First half focuses on hero’s adventures.

Its better to watch National Geographic channel than spending for ticket price. Rakul’s character as practical entrepreneur is half baked. She throws attitude as an cut-throat entrepreneur but her screen presence is quite contrast.

The romantic episode between lead pair doesn’t work a bit. Conflict that arises post interval appears forced and not so convincing. Film gets too lethargic from pre-climax that audience wait for sigh of relief.

Karthi is uber cool as an adventurous guy but is not much different from his role in Maniratnam’s ‘Cheli’. Perhaps, he performs well. Rakul looks too lean and the charm is missing on her face. She is decent with her work. The romantic chemistry between Karthi and Rakul in Khakee doesn’t come out that well here.

Leave your valuable feedback on our Dev movie review