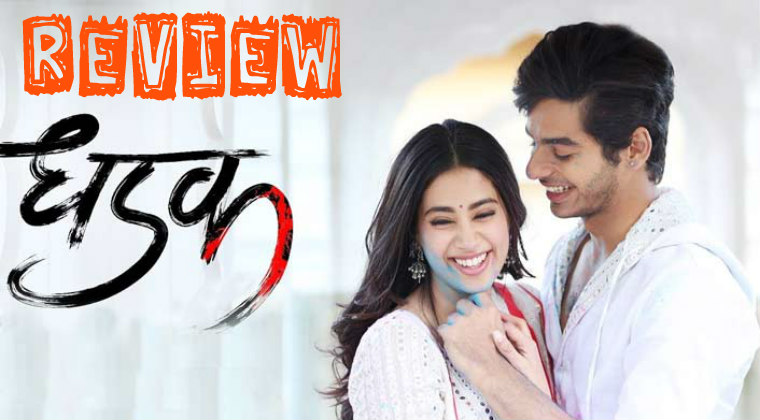 Dhadak Full Movie Review And Rating
Cast – Ishaan Khatter, Janhvi Kapoor, Ashutosh Rana
Production House – Zee Studios & Dharma Productions
Producer – Karan Johar, Zee Studios, Hiroo Yash Johar & Apoorva Mehta
Director – Shashank Khaitan
Censor: ‘U/A‘
Run-Time: 138 mins ( 2 Hours & 18 Minutes)
Dhadak Story:
Set in Udaipur, Rajasthan, “Dhadak” is the love story of Madhu (Ishaan Khatter) and Parthavi (Janhvi) who are classmates in college. While he hails from an ordinary family and helps his father run a restaurant, she is the daughter of Ratan Singh (Ashutosh Rana), a local politician belonging to a higher caste. Smitten by her, Madhu follows her around like a lost lamb and it is his perseverance and sincerity that makes her come round too, and fall madly in love with him.
A small home where rotis will be made for just the two of them as opposed to the big bungalow he always promises her, is all she wants in her love story.
Her brother Roop and father are against this alliance and try to separate the two, but of course they succeed in running away and settling down in Kolkata with the help of his maternal uncle who loves him dearly.
Dhadak Review:
Director Shashank Khaitan’s “Dhadak” suffers from a lack of intrigue, right at the outset, as owing to being based on the popular Marathi hit “Sairat”, naturally, the story and outcome are all prefixed and something the audience is acquainted with. So it is only the performances that you are looking forward to, albeit with high expectations. And indeed those keep you hooked
It is the script which appears to be a staid, cut copy, paste unimaginative job on the “Sairat” template. Thus, “Dhadak” lacks a soul of its own. It is the dramatic end however, which leaves a greater impact than even the original.
The characters are not well-etched and although the pace of the film is deliberately slow, to help you become a part of Madhu and Parthavi’s life, the director seemed to be in a hurry to race along, by merely changing the milieu and setting, but otherwise, following the original to the core, without adding depth to the characters and establishing a raison detre.
Performances:
Ishaan Khatter as the lovelorn Madhu, is endearing and charm personified. His passion, sincerity and energy are palpable and he becomes Madhu with ease.
Jhanvi as Parthavi, is more restrained, but a firebrand too. She has a strong screen presence and emotes with confidence.
Their on-screen chemistry is good and they make a cutely innocent pair. It is their sincere performances that involve you and make you feel their pain, joys and anxieties.
The character actors, especially his two friends, lend able support.
Technically:
The music is a highlight of the film and “Pehli Baar”, is beautifully picturised. The title song “Dhadak” is soulful and sets the mood of their life. The sheer beat and pace of “Zingaat” makes it a treat to watch as well.
The cinematography by Vishnu Rao does justice to Udaipur and Kolkata and the ethos and physical beauty of both these places are well-captured.
Bottom line: Overall, the performances outdo the mediocrity of the script and keep the film afloat.