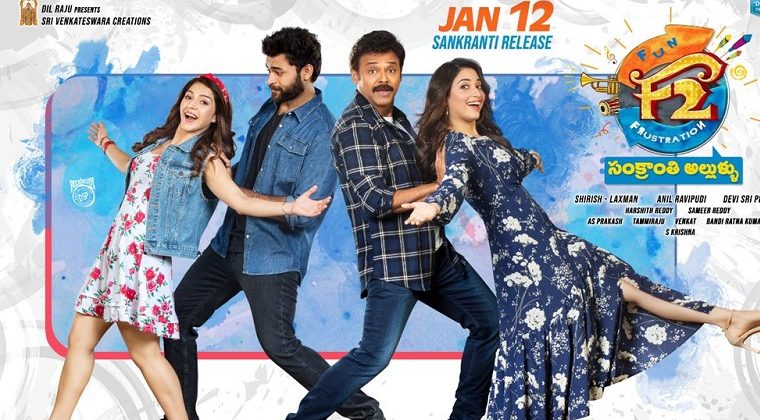 F2 – Fun and Frustration is billed to be comical family entertainer releasing amid big ticket flicks for Sankrathi. Anil Ravipudi who is best at presenting hilarious commercial entertainers have helmed this multi-starrer with Victory Venkatesh and Varun Tej in the lead roles. Tamannah and Mehreen Pirzada are the female leads.

Venky (Venkatesh) works as a PA to MLA  and Varun Yadav (Varun Tej)  is a Hyderabadi guy.

Harika (Tamannaah) and Honey (Mehreen) are pretty siblings who are ego-centric always throwing attitude. Venky gets arranged married to Harika while Varun falls in love with Honey.

Venky’s life turns upside down as it goes into control of his wife and mother-in-law. Venky learns that Varun is in love with Honey and alerts him not to join the family. But, Varun doesn’t heed to Venky’s warning and marries Honey.

Both the guys realize their in deep mess and want to break up with their wives. Venky and Varun go on trip to Europe upon counselling by neighbor (Rajendra Prasad) . Harika and Honey too follow. All of them land in Prakash Raj’s Home. What happens next would be fun to watch on big screen.

F2 is a lighter vein comedy entertainer with no emotional or sentimental baggage. Anil Ravipudi wants to make a laugh riot sans any serious drama. He succeeds to a large extent. The film is perfect dish for Sankranthi festival. Narration with entertainment as its prime factor is the USP of the film.

Anil Ravipudi’s knack at penning funny, witty dialogues adds pep to the proceedings.  First half is filled with situational comedy. Henpecked husbands suffering with egoistic wives is the main theme of the film. There are several ROFL moments.

Their frustration at dealing with their wives evoke fun. Perhaps, wafer thin storyline give less scope for any surprising twists. Second half is also comical but gets somewhat repetitive. Some slapstick comedy goes over the board. Europe episode goes off the track from the story and it all converges at a regular style climax. VarunTej’s forced Telangana accent isn’t good, his characterization is okay.

F2 is colorful and visually candy. Background music is okay and songs are let down. Screenplay could have been more engaging avoiding redundant scenes.

Victory Venkatesh is back with his amazing comical timing that is ultimate. It’s a reminisces of his performances of Nuvvu Naku Nachav, Malleswari and Aadavari Matalaku Ardhale Verule. Varun Tej tries something new on comedy with Hyderabadi slang. Tamannaah and Mehreen sizzle in their roles and also rub their funny side adding to the humour. Prakash Raj is wasted. Raghu Babu and Priyadarshi are hilarious. Vijaya and Annapurna playing comedy also contribute to fun.

Leave your valuable feedback on our F2 movie review