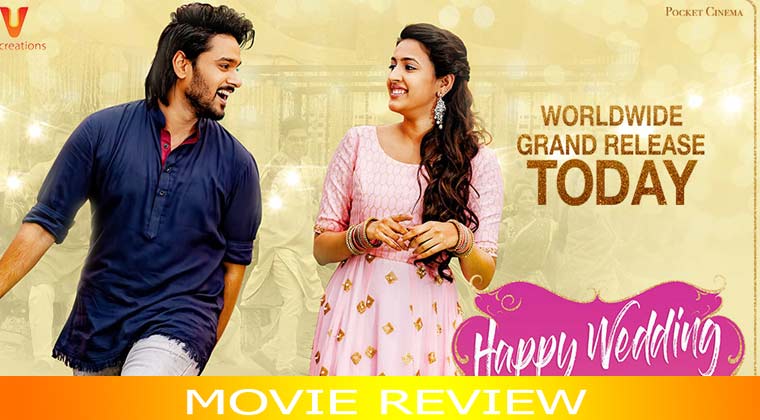 Cast : Sumanth Ashwin, Niharika Konidela, Naresh
Director : Lakshman Karya
Producers : UV Creations & Pocket Cinema
Music: Shakthikanth Karthick
DOP: Bal Reddy
Story:
Anand (Sumanth Ashwin) and Akshara(Niharika) are love birds who decide to become life partners. Meanwhile, petty issues that pop up between them make Akshara to have a second thought on her marriage. The differences develop into a clash involving family members. How the differences are sorted out and the young couple gets to learn the significance of marriage is the remaining story is all about.
Review:
Happy wedding deals with trending topic relevant to today’s generation. Hurried decisions in choosing life partners and thereby leading to early breakups is seen every now and then. The film focuses on the relationship of one such young couple who develop hostility towards marriage.
The film is sensitively dealt and moves at steady pace with no highs. Subtle lighter vein comedy may appeal to selective audience. which the regular audience look forward to. Emotions underplay that they don’t connect or carry. Lead pair appear chill buddies than couple as there is no romantic chemistry.
Performances:
Niharika has improved a lot in terms of expressions and timing. She scores a ton as confused young lass. Sumanth Ashwin too gives his best. His makeover helped a bit time. Murali Sharma, Naresh, Indraja and Tulasi are good emotions.
Technically:
The film has got decent production values. Cinematography needs special mention that the film gives a fresh and cool watching experience.  Thaman scored BGM adds flavor to the movie. Songs are not upto the mark. There are some well written dialogues.
Bottom-line: Happy Wedding – Snipped webseries