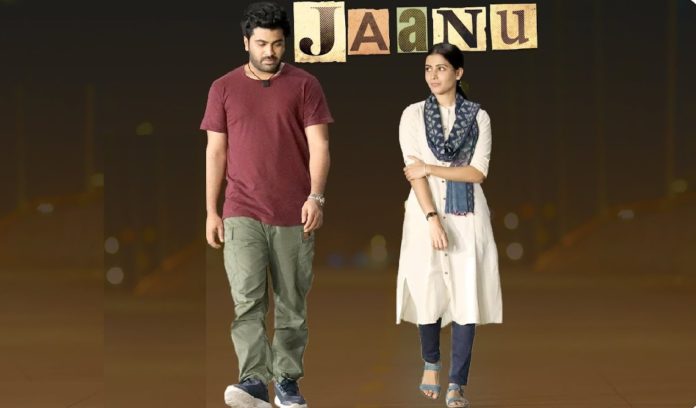 Ram Chandra (Sharwanand) is a wildlife photographer who also teaches the skill to a few students. He is an introvert by nature. During a trip to his hometown, some old memories come rushing back to him as he visits his school. Urged by the school watchman (Raghubabu), he calls up his school best friend (Vennela Kishore), who adds him to their class’ WhatsApp group. His classmates are delighted to see the elusive Ram join their group and soon, they start planning a classmates reunion at a resort.

The first half whips up nostalgic memories of the lead pair’s school days. We are told that Ram was just an average student, madly in love with his classmate and singer Janaki, aka Jaanu (Samantha). Teenage romance that unfolds in nineties village school is refreshing. Interval is overwhelming with reunion of lovers after years.

The second half showcases matured love story between Ram and Jaanu (now married and settled in Singapore). The former lovers go through a flood of emotions after they meet, making you root for them. The second half is interesting and conversational but what grabs you is the smart writing – reasons are given as to why they never got in touch with each other after a sudden separation despite being madly in love with each other, which keep you from wandering off. The backstory is told in an understated yet touching manner without any melodramatic clichés. In a way, Jaanu is also a study of two contrasting characters where the heroine is definitely stronger and more assertive than the male.

There are also certain scenes in the film which stand out. The school scenes are beautifully picturised and a scene in the second half where Janu asks Ram whether he is still a virgin, is a hoot. The heartwarming conversations between the lead pair and the winning climax which reinforces what one already knows: letting go of what you really love, has been translated to the screen effectively by Kumar. The colour tonality, locations and overall composition of the frames enhance the narrative along with Govind Menon’s music.

Sharwanand and Samantha’s performances match upto Vijay Sethupathi and Trisha from the original. Supporting roles are also well played. On the whole, if you like romance, Jaanu is pure magic.