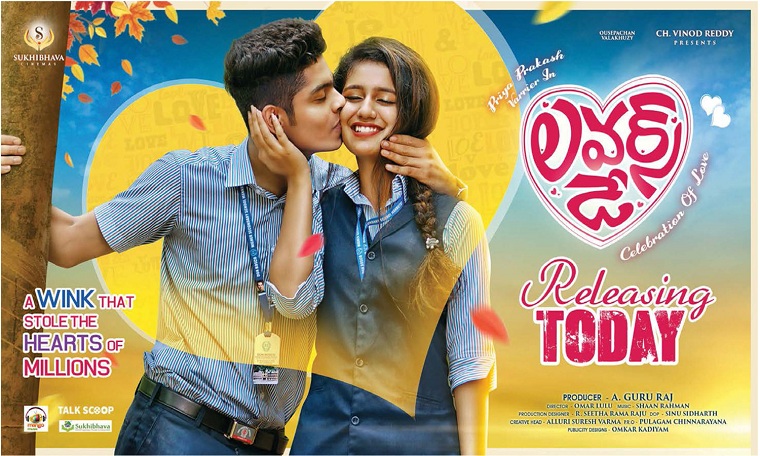 The wink sensation beauty Priya Prakash Varrier took nation by storm last year. Her debut Malayalam movie ‘Oru Adaar Love’ has been an eagerly awaited movie. The film releases as Lover’s Day in Telugu on the occasion of Valentine’s Day.

Lovers Day is like any other High school romance drama where a bunch of boys tries to impress girls out of infatuation. The tender love story between teens who are excited in adolescence and ignorance of real world woes. How they deal with the misunderstandings that arise in relationships is showcased. The differences that crop up and how they overcome and patch up again forms the story.

Though the movie was first a story of different characters, observing the sudden overnight fame of Priya Prakash by the trailer released the movie makers have changed the concept and concentrated on wink beauty. While the other characters turned out to be supporting roles in the film. Priya Prakash Varrier and Roshan were at their best being their debut movie.

The wink act and the lip locks got cheers from the audience. While Sridevi Bungalow actress awed the audience with her wink act actor Roshan impressed with his dance moves. Noorin Sherif who acted as actress friend has got good marks from the audience. The film ends on a tragic note. On whole, the director worked out well in bringing the performances from the actors.

As the trailer released on last year’s Valentine ’s Day has become famous with the wink act the makers have reshot the film completely which has cost the producers and director more efforts. But there is nothing great happened in the technical aspects.

The editor and music departments have worked well. There are lapses in the story and direction and screenplay. Not so great first half and weak second half overall is an all mixed fruit juice for the audience.