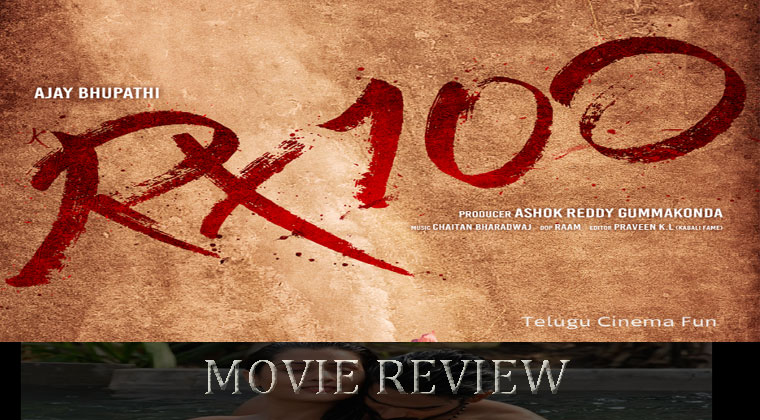 RX100 Full Moview Review And Rating
Cast : Karthikeya and Payal Rajput
Director : Ajay Bhupathi
Music  : Chaitan Bharadwaj
Producer : Ashok Reddy Gummakonda
Story
Shiva (Kartikeya) is a theater owner in a village. He is an ill-tempered guy who picks quarrels for petty things. He cares a damn of anybody. His doting dad (Ramki) supports whatever he does. Siva’s life turns upside down after meeting Indu (Payal). Ramki works for Rao Ramesh they get divided over a clash. Indu’s father (Rao Ramesh) marries her off to another guy. Heartbroken Siva turns a Devadas. Will he ever get to normalcy? Will Indu come back to him again?
Rx 100 Review
RX 100 garnered buzz with teasers showcasing bold romance and raw violence. It has been compared to Arjun Reddy which turned a huge success. Probably, hero’s aggressive characterization is the reason. RX 100 made on the same flavor of a romantic entertainer but the magical feel is missing. It’s a rich Vs poor love story. First half is dull and slow paced. However its spiced up with some intimate romance and liplocks.  The film picks up pace with an interesting twist in second half with some raw and dark episodes. It reminds us of several Tamil films of same genre.
Technically:
Director Ajay Bhupathi has to be lauded for honest attempt at keeping the film realistic sans unnecessary commercial elements. The film is given a rustic feel having set in village backdrop. Perhaps, the lack of emotional depth in the scenes make the film an underwhelming experience. Music and cinematography are decent.
Performances:
Karthikeya looks a stud with his rugged look and is also okay with his performance, Payal is also decent as girl-next-door with suppressed emotions.
Bottom-line: RX 100 – Rusted romantic needs an overhaul
Leave your valuable feedback on RX100 Movie Review