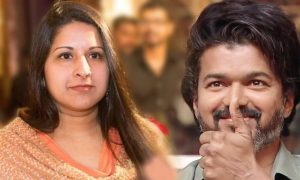 Divorce is, of course, a personal choice, but, when it’s from a celebrity, the news goes viral and it leads to a lot of discussions and debates. Several movie celebrities from Hrithik Roshan, Arjun Rampal, Siddharth, Naga Chaitanya, Samantha, Dhanush, Amala Paul, and Aamir Khan have gotten divorced due to differences with their partners.

Of late, there are reports that it’s not all well between Tamil Superstar ‘Thalapathy’ Vijay and his wife Sangeetha and they decided to part ways after 23 years of their marriage. Vijay and Sangeetha got married on August 25th, 1999 as per the Hindu and Christian traditions after they fell in love. They are blessed with two children Jason and Divya.

Vijay’s wife hardly misses his movie functions or any events. But she was not seen during some of the recent and important events in Chennai which led to the rumors. The star hero shares a great bonding with director Atlee and his wife Priya. Sangeetha was missing from Priya’s baby shower event. The leading media houses carried the news about the divorce of Vijay and Sangeetha.

As per the sources, Vijay’s wife Sangeetha along with their kids is holidaying in the USA because of which she was absent. Vijay is also expected to join the family in the USA soon after the release of his next offering Varisu movie.

With a lot of speculation going on, we have to wait to see if Vijay issues an official statement about his divorce.

It’s official: Manjima Mohan getting married to this Hero