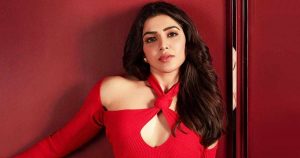 Star actress Samantha who was last seen in the action thriller Yashoda is now all geared up for her mythological love story Shaakunthalam. The actress has been battling an autoimmune disease, Myositis for quite some time. She even skipped the promotions for her last movie Yashoda but completed the dubbing despite undergoing treatment.

Also Read: Adivi Sesh opens up about his relationship

Despite being under treatment, the actress is dubbing for her movie Shaakuntalam. Samantha posted a photo from the dubbing session along with an inspiring quote by Australian author Nikki Rowe. The actress stated, “Art is my cure to all this madness, sadness, and loss of belonging in the world & through it I’ll walk myself home. -Nikki Rowe #shaakuntalam .” The actress is showing courage and exudes positivity in the process of overcoming her medical condition.

A few days ago, Samantha shared her resolution for the New Year. “Function forward… Control what we can!! Guess it’s time for newer and easier resolutions… ones that are kinder and gentler on ourselves. God bless Happy 2023!!”

Her recent release Yashoda which dealt with the surrogacy mafia was released in November and Samantha got an appreciation for her stunts in the movie. Samantha’s next release Shaakuntalam is a mythological love story that will also release in the 3D format in multiple languages.

Directed by Gunasekhar, Shaakuntalam is produced by Gunasekhar’s daughter Neelima Guna and Dil Raju is presenting the film. The movie will release on 17th February this year.

Samantha opens up about her life struggles