This Diwali actress Janhvi Kapoor was seen along with two of her rumored exes — Shikhar Pahariya and Akshat Rajan. And since then, her dating life has been in the news. However, Jahnvi, who is currently promoting the latest movie ‘Mili’, has confirmed that she’s not dating anyone and she is still single at the moment. 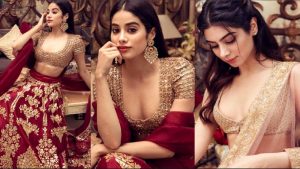 When asked about the worst thing that she has read about herself, Janhvi revealed to Bollywood Bubble, “That I was dating Akshat Rajan, who is my childhood best friend, and then I broke up with him and now Khushi is dating him.” She further clarified that the rumors were not true, and added, “None of us ever dated him. He has just been our best friend since we were babies.”

Janhvi also said that her fans need not react to such silly rumors that come out on the net. Janhvi is busy with the promotions of her new film ‘Mili’ which is a survival thriller that also stars Sunny Kaushal and Manoj Pahwa. The movie is directed by Mathukutty Xavier and produced by her father Boney Kapoor. It’s an official remake of the Malayalam movie ‘Helen’ and is slated for November 4th release.