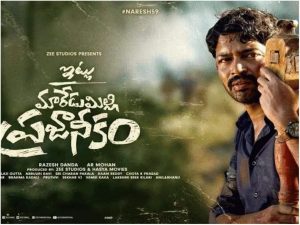 Allari Naresh who was once famous for comedy entertainers is no longer effective. With the rise of comedy shows on Television and star heroes attempting the comedy genre, Allari Naresh’s movies have become monotonous and the actor couldn’t deliver a hit after Sudigadu. After a brief hiatus, Allari Naresh opted for serious roles rather than comedy ones. He won laurels for his acting in Maharshi in which he played a key role as Mahesh Babu’s friend. Naresh scored a solo hit after a long time with the movie Naandi. Now, he comes up with another serious drama Itlu Maaredumalli Prajaneekam. Let’s see what the movie is all about and how it fares.

Srinivas (Allari Naresh) plays a Telugu teacher in the movie. He is assigned the job to conduct the elections in the Marudemalli forest in Andhra Pradesh which is an agency area. He is assisted by another teacher Vennela Kishore. After landing in Maredumalli, he comes to know the pathetic situation of the villagers who are struggling for basic facilities. As there are no minimum facilities like hospitals, proper roads, and bridges to cross the river, the villagers decide to boycott the elections.

He decides to join them in the fight against the government. How Srinivas manages to fulfill his goal is the rest of the story.

The movie’s plot is quite convincing and focuses on the real problems faced by the people in that area. Allari Naresh has done a decent job as an election officer in the movie.

Vennela Kishore doesn’t disappoint again. He entertains with his impeccable comic timing. His dialogue delivery, mannerisms, and funny antics are a treat to watch. He holds the first half in an interesting manner.

The second half has some good emotions. The small twist that is brought during the break time and how it is carried forward has been handled decently. The plight of the villagers who live in forest areas has nicely been showcased by the director.

Though the director has taken a serious point, he failed to narrate it in an interesting way. The lack of excitement and some superficial scenes make the movie an uninteresting one.

On the whole, Itlu Maredumalli Prajaaneekam is a movie made with an important point and an underlying message. Though the movie has some thought-provoking scenes and ample entertainment, it’s not an engaging watch.