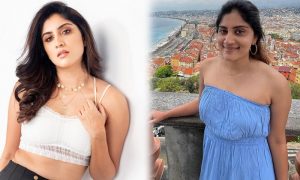 Actress Kalpika Ganesh who has been revealing many secrets of celebrities on her YouTube channel stated that Balaji Mohan was controlling his wife and is refusing to allow her to act or promote the Telugu movies she has already done.

Following this, Balaji Mohan has filed a petition in the Madras High Court, which read, “I have directed films like How I Fall in Love, ‘Maari’ and ‘Maari 2’. I got married to Dhanya Balakrishna, who has acted in films like ‘7 aam Arivu’ and ‘Raja Rani, on 23rd January last. Kalpika Ganesh, an actress from Telangana who acts in web series, has released videos on YouTube to spread defamation about our marriage and personal life. She also shared it on social media.”

In the petition, the couple sought a restraining order against Kalpika Ganesh for making defamatory comments about their personal life. Judge Senthilkumar Ramamurthy, who heard the petition, ordered a ban on actress Kalpika Ganesh from making defamatory comments about Balaji Mohan and his wife Dhanya Balakrishna. The judge also ordered notice to the defendant and adjourned the matter to January 20.

Its a wrap Up for Sai Pallavi