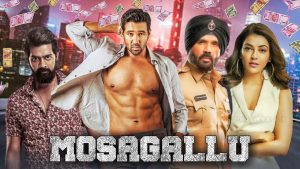 Vishnu Manchu’s latest movie Mosagallu which was released amidst huge hype ended as a decent hit at the box office. Starring Vishnu Manchu and Kajal Agarwal as siblings, the movie is based on real-life incidents around the widespread growth of phishing calls and organized cybercrimes of scamming.

The movie was dubbed into Hindi as Tamil and Kannada as Anu and Arjun and in Malayalam as Arjun and Anu.

Directed by Jeffrey Gee Chin, the movie’s story was penned by Vishnu Manchu who also produced the movie. The movie also featured Suniel Shetty, Navdeep, and Naveen Chandra in other important roles. Mosagallu opened with decent numbers and ended as an average grosser at the box office with a total collection of 12 cr in Indian Rupees. Mosagallu movie’s digital rights were bagged by Amazon Prime.