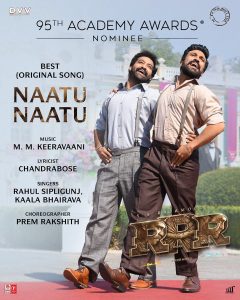 It’s a moment of pride and time to celebrate for the Indian film fraternity as the ‘Naaut Naatu’ song from SS Rajmouli’s magnum opus RRR managed to make it to the nomination for the 95th Academy Awards. After creating history earlier at the coveted Golden Globes and Critics’ Choice Awards’ winning list, the ‘Naatu Naatu’ song was nominated for the 2023 Oscars, making it the first Indian song to achieve this rare feat.

‘Naatu Naatu’ song from ‘RRR’ has been nominated in the Best Original Song category in this year’s Oscars. This is the first Telugu song to receive an Oscar nomination in the history of the awards.

This year’s Original Song nominees are music to our ears. #Oscars #Oscars95 pic.twitter.com/peKQmFD9Uh

Collective efforts by the entire team of artists led by director SS Rajamouli delivered something which won international acclaim and went on to be nominated for the Academy Award for best song.