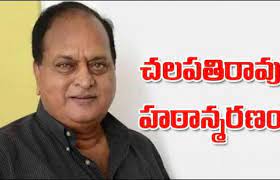 Tollywood’s senior actor Chalapathi Rao garu passed away last on Saturday night at his residence in Hyderabad. The cause of death was reported as cardiac arrest. He was 79.

Chalapathi Rao began his career with blink-and-miss appearances and later acted as a villain in several movies before turning into a character artist with Krishna Vamshi’s Ninne Pelladatha movie. Chalapathi Rao was born at Balliparru in Krishna district in 1944. Acted in 600 and more films, Chalapathi Rao garnered a good reputation in the industry.

Several Tollywood personalities mourned the sudden demise of the actor. They expressed their deepest condolences to his family. The mortal remains of the actor are kept at his son’s residence. They will be moved to Mahaprasthanam at 3 PM today.

The last rites will be performed on Wednesday as his daughter who resides in the USA need to come to India.