For the past few years, Pan India movies have become an obsession for every actor irrespective of their image and stardom. The latest to join the list of actors testing their luck with the Pan India movie is Sudheer Babu. The actor who hasn’t delivered any blockbusters in his over decade-long career is trying for a Pan India image with his upcoming movie.

Read: Rishab Shetty not the first choice for Kantara? 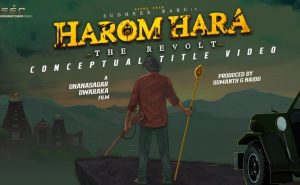 The actor who is busy with the upcoming movie ‘Hunt’ has also signed a multilingual Pan India movie titled ‘Harom Hara: The Revolt’. Directed by Gnanasagar Dwaraka of ‘Sehari’ fame, the movie is believed to be a period drama set in the backdrop of Kuppam in 1989.

The movie is said to be an action drama with a divine touch. Produced by Sri Subramaneshwara cinemas, the movie will be simultaneously released in Telugu, Tamil, Malayalam, Kannada, and Hindi. More details about the movie are yet to be revealed.