Though he has a strong family background and a superstar brother Allu Arjun, Allu Sirish hasn’t yet made a mark for himself as a hero. Barring forgettable hits like ‘Kotha Janta’, and ‘Sree Rasthu Shubamasthu’, Allu Sirish hasn’t delivered a blockbuster. 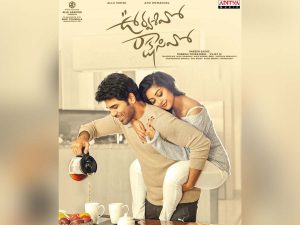 After the debacle of the ABCD movie, he is on a sabbatical for a long time and came up with ‘Urvashivao Rakshashivo’, an urban romantic entertainer aimed at the youth. Let’s see whether this Allu scion can score a hit with this movie or not.

Sree Kumar (Allu Sirish) is an IT employee who comes from an orthodox family. He goes head over heels for his co-employee Sindhu, a modern and independent woman who is raised in the United States of America. After admiring her silently, he dares to propose to her for marriage, but she chooses a live-in relationship instead. Sree accepts it and tries to conceal it from his parents. How a conservative guy like Sree hides his relationship from his parents and did Sindhu agrees to marriage or not is the rest of the story.

The movie is a remake of the Tamil movie ‘Pyar Prema Kadhal’. Allu Sirish who often gets trolled for his acting chose the script that suited him well. This movie isn’t just one more film about a live-in relationship. It gives a new twist to the live-in relationship story of a heroine who is opposed to marriage and a boy who is seeking marriage.

The major highlight of the movie is Vennela Kishore and Sunil narrating the live-in-relationship in the IPL commentary style.

On the whole, ‘Urvashivo Rakshashivo’ is a youthful entertainer with a full dose of romance, and intimate scenes. Barring an inconsistent second half, the movie is a decent watch.

What To Expect From Naa Peru Surya Teaser?