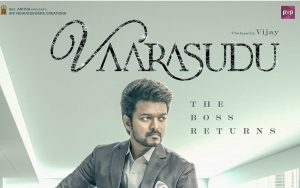 Ever since Dil Raju, announced the release date of his movie Varasudu for Sankranthi, there’s been a big debate and criticism over it. As per the producer’s council, it was decided not to release the dubbed movies during the festivals. But, Dil Raju is adamant and ready to release Vijay’s Varasudu movie on 11th January.

However, as per the latest update, though the Tamil version of Varisu is releasing on 11th January as expected, there’s a delay in the release of the Telugu version of Varsudu. The Telugu version is postponed to January 14th. The official announcement will be done at a press meeting later today by the producer Dil Raju and director Vamshi Paidipally.

As per the reports, the content delay is likely to be cited as the reason for the postponement of the movie release. The postponement means abundant availability of theaters for Balakrishna’s Veera Simha Reddy and Chiranjeevi’s Waltair Veerayya Day 1. On January 14th, two movies – Vaarasudu and Kalyanam Kamaneeyam are getting released.

Is this Kollywood Superstar heading for divorce?