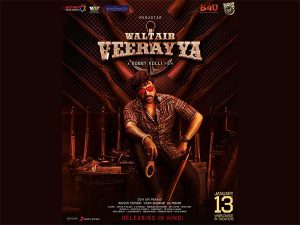 Megastar Chiranjeevi, who made a strong comeback into movies after a decade-long’s self-imposed exile with Khaidi No 150 movie has taken a two-year gap for his next movie Sye Raa. However, the senior star hero seems to be in a hurry to have continuous releases now.

Like never before, Chiranjeevi has been releasing movies in a row. After the debacle of Acharya, he took a few months’ breaks and released God Father movie which was an average grosser at the box office. Now, he’s all set for a mass entertainer Waltair Veerayya directed by Bobby.

Touted to be an action entertainer, the movie also has Ravi Teja as another hero and Shruti Haasan playing the female lead. The movie has cleared the censor formalities with U/A certification and is all set for a grand theatrical release on 13th January 2023.

It’s heard that the movie will be on the lines of Maniratnma’s movie Gharshana which is all about the rivalry between the foster brothers. The movie also has Rajendra Prasad, Bobby Simha, Vennela Kishore, Catherine Tresa, Pradeep Rawat, and Srinivas Reddy in other important roles.

Along with this, Balakrishna’s Veera Simha Reddy and Thalapathy Vijay’s dubbed movie Varasudu which is directed by Vamshi Paidipally and produced by Dil Raju are gearing up for Sankranthi release.