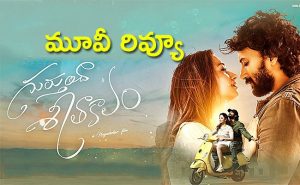 One actor who has been constantly mesmerizing with his performances in Tollywood is Satyadev. After making his debut in a small role in Prabha’s Mr. Perfect movie, Satyadev has done several insignificant roles before making his mark with movies like Jyothilaxmi and Appatlo Okadundevadu. He turned hero and has been delivering decent movies. Satyadev’s important roles in God Father and RamSetu movies were well appreciated. His latest movie Gurtunda Seetakalam has finally been released after several postponements. Let’s see what the movie is all about.

The movie is a recollection of a man’s past love stories while on a journey. On his way to a location, Dev (Satyadev) offers a drop to Megha Akash in Mangalore. While on their journey, Dev shares his past with Megha Akash and recollects his past love stories. His first love was in school and his second love is a rich woman Amrutha (Kavya Shetty), his college mate.

As a rich woman, she has huge financial demands and Dev relocates to Bangalore and works tirelessly to improve his financial position. However, they part ways due to Amrutha’s obsession with money.

To make him normal, his friends set him to date up on a date with their colleague Nidhi (Tamannah). Finally, they get married and while leading a happy life, an unexpected twist arises. What’s that twist is the rest of the story.

The director Nagasekhar seems to have been inspired by Ravi Teja’s Naa Autograph movie and Premam movies and made a movie on those lines. It’s a remake of the Kannada movie Love Mocktail which was a super hit. As the Telugu audience has seen such movies earlier, the movie doesn’t excite us, and even the twist in Tammannah and Satyadev’s romance doesn’t shock us.

After a decent first half, the movie completely drops in the second half. The conflict gives us a feeling of an outdated one.

Dev(Satyadev) is a middle-class guy who falls in love with Ammu(Kavya Shetty). But his love story ends in a bad manner. Dev then gets married to Nidhi(Tamannah) and starts a happy life. But a sudden twist changes the life of the couple. What is that twist and how does the couple overcome it forms the rest of the story?

Overall, Gurtunda Seetakalam is an outdated and uninspiring romantic movie. Tamannah and Satyadev try hard to salvage this film with their performances but the boring narration and shoddy screenplay hamper it all.