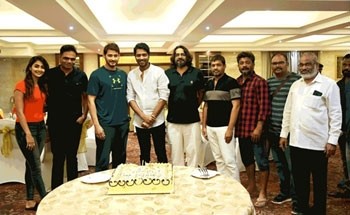 Mahesh Babu’s film in the direction of Vamsi Paidipally is progressing at steady pace. Shooting has been going on in Dehradun. Superstar sported rugged look with beard and hair-locks.
As was reported, Allari Naresh will be seen in a key role in this film. The comedy hero has joined the sets. Team is filming college related scenes involving Mahesh, Naresh and Pooja Hegde.
As per buzz, Prince will be seen as a ultra rich guy while Naresh plays his poor friend. The film’s plot revolves round farmer suicides. ‘Rajasam’ and ‘Rythubidda’ are the titles in consideration. Dil Raju and Ashwini Dutt are jointly producing the film. It is planned for Summer release.

Pooja Hegde unhappy with this Heroine