It’s the wedding season all over the film industry. Just a few days ago Tollywood actor Naga Shaurya announced that he’s getting married to his girlfriend Anusha Shetty and now Kollywood hero Gautham Karthik also revealed his wedding date. 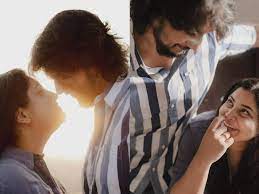 Just a couple of weeks ago Gautham Karthik and Manjima Mohan made their relationship official, and ever since then, fans are eager to know when will these two enter wedlock. Now, the latest reports claim that they are likely to get married on 28th November this year in Chennai.

The media reports also suggest that their wedding will be a private affair with family and close friends in attendance. Post the wedding, the couple will have two receptions in Ooty and Chennai. An official announcement is still awaited.

On the work front, Gautham Karthik is currently busy with the shooting of Pathu Thala, and on August 16, 1947, Manjima Mohan has October 31st Ladies Night in the pipeline.