Like never before Chiranjeevi is on a signing spree. The actor had already two releases this year in the form of Acharya and God Father and he is busy wrapping up Waltai Veerayya and Bhola Shankar movies. 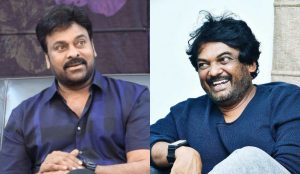 The movie is said to be high on emotions with the father-son relationship being the major highlight. The film story is narrated from the eyes of the father and though loaded with emotions, it has an equal amount of action. However, an official announcement is yet to be made from Puri Jagannadh on this project.

After the debacle of the LIGER movie, Puri Jagannadh hasn’t announced any movie till now. His dream project JANAGANAMANA which was announced was later shelved even after shooting a few scenes. The failure of the LIGER movie forced Vijay Deverakonda to walk out of the project.

Chiranjeevi conferred with a prestigious award

SyeRaa to have Sweety Surprise !