This year has been full of joy for celebrity couples. Ranbir Kapoor-Alia Bhatt, Bipasha Basu-Karan Singh Grover, and Priyanka Chopra-Nick Jonas welcomed their first child this year. The latest to join the bandwagon of celebrity pregnancies in 2022 is Ram Charan and Upasana. 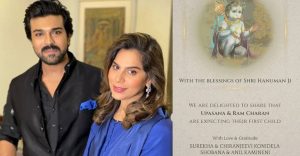 The superstar is all set to embrace parenthood and the good news came after a decade after the couple got married. This has definitely brought a wave of happiness to the Konidela and Kamineni families.

Confirming the same on his social media handles, Ram Charan shared a note that reads, “With the blessings of Shri Hanumanji, we are delighted to share that Upasana and Ram Charan are expecting their first child.” This was further signed off with the names of the couple’s parents – “With love and gratitude Chiranjeevi and Surekha Konidela and Shobana and Anil Kamineni.”

While the couple is yet to welcome their child, there have been speculations about the kids’ names. It’s reported that Chiranjeevi has decided on the names already. If it’s a baby boy, he will be named as Anjan Tej, and if it’s a baby girl, the girl will be named Anjani. As Chiranjeevi is an ardent devotee of Lord Hanuman, he wants his grandchildren to be named after the almighty.

Sreeja introduces the important person in her life