If last year was the season of love and weddings, this will be even bigger if reports are to be believed. Recently, the love birds Alia Bhatt and Ranbir Kapoor got hitched in Bollywood and Nayanatara entered wedlock with Vignesh Shivn from the south. 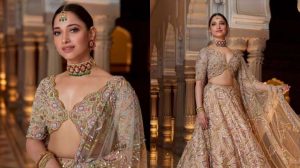 As per the sources, Hansika Motwani will be getting married this December, and the news has been officially announced. Apart from Hansika, Tamannah Bhatia is also making waves on the internet as reports of her impending marriage to a Mumbai-based businessman are circulating.

According to the reports, Tamannah has decided to get married and start a family soon. It’s rumored that she will be getting married to a businessman from Mumbai and the wedding works have already begun. However, an official announcement is yet to be made by Tamannah.

On the work front, Tamannah has a couple of projects lined up for release. ‘Gurtunda Seethakalam’ with Satyadev and ‘Bhola Shankar’ with Chiranjeevi is up for release. She will also be seen in Amazon Prime’s web series ‘Jee Karda’ which also features Suhail Nayyar and Aashim Gulati.