Superstar Mahesh Babu and director Trivikram Srinivas have collaborated for the third time after a long gap of 12 years for an untitled movie. The movie’s shooting began a few weeks ago and the team is all set to begin the second schedule soon. 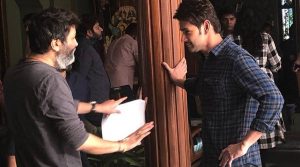 However, there are several gossips making rounds on social media that Mahesh Babu isn’t impressed with Trivikram’s work and he moved out of the project. It was buzzed that the project got shelved due to creative differences between the director and the hero.

Read: Rishab Shetty not the first choice for Kantara?

But, the producer Naga Vamsi has given clarity on the same. He confirmed that the movie isn’t shelved and the regular shooting will commence soon. “The second schedule of our most awaited action extravaganza #SSMB28 will begin soon. Many more exciting updates will be unveiled in the upcoming days. Stay tuned!” tweeted producer Naga Vamsi on social media.