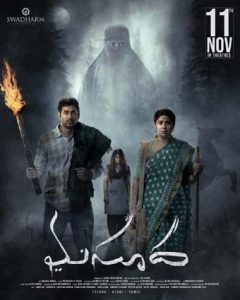 Among all the small-budget films released this week, only ‘Massoda’ caught everyone’s attention. Produced by Rahul Yadav Nakka, whose two previous productions ‘Agent Sai Srinivas Athreya’ and ‘Malli Raava’ won accolades, this movie created a decent buzz before its release. Let’s see what the movie is all about.

Nazia (Bhandhavi Sridhar) a teenage girl lives with her mother Neelam (Sangitha) in an apartment. Their family shares good rapport and bonding with their neighbor Gopi Krishna (Thiruveer), a software employee. When life seems to be going smoothly, a sudden change in Nazia’s behavior worries her mother. Gopi tells that Nazia is possessed by a ghost and needs to be treated immediately.

With Nazia behaving peculiarly, they seek the help of tantriks. The rest of the movie is all about peeru baba finding the backstory of Masoodabi and how she is related to Nazia.

The movie doesn’t take much too much time to set the mood of the audience. The introduction scene itself is intriguing and gore. Once the flashback is finished, the story shifts to Hyderabad. While the movie goes in an interesting way, Gopi’s love track becomes a hurdle and it’s quite boring. The movie frightens just before the interval episode.

The second half is full of violence, bloodshed, and screams. The backstory of Masoodabi is spine-chilling but it’s overboard. The movie offers a fear factor but fails to engage with the story.

Director focused more on creating fear with loud sounds, screams, and gore elements and missed the narration which goes flat.

Too much bloodshed and loud scenes

On the whole, ‘Masooda’ is another horror movie with a different backdrop. Despite a few lags and slow narration, the movie is a decent watch.

Chiranjeevi conferred with a prestigious award