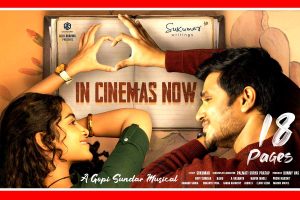 Young Hero Nikhil is riding high after the massive success of Karthikeya 2. The young hero who made failed attempts to emulate Ravi Teja has finally found success with thriller movies. His last release Karthikeya 2 movie was a phenomenal success in Telugu, Hindi, and other languages.

He is all set to test his luck with a romantic entertainer 18 Pages which has Anupama Parameswaran as the heroine again after Karthikeya 2. With the movie’s plot penned by Sukumar and presented by Allu Arvind, the expectations were high for the movie. Surya Pratap, who directed Kumari 21 F is back after seven long years with this movie. Let’s see if the movie can live up to the expectations or not.

Siddhu (Nikhil Siddharth), is an app developer by profession. As he was cheated on by a girl, he gets into depression. Siddhu finds a diary on the roadside when he was in a drunken state. He starts reading the diary which was written by Nandini (Anupama Parameswaran) two years ago in 2019. Being impressed by her, Siddhu falls in love with her and tries to search for her.

When he tries to meet her a big twist comes into the tale. What is the twist and what is the back story of Nandini forms the crux of the story.

Though the movie’s theme is good, the movie’s entire first half runs at a snail’s pace with some artificial emotions. However, the movie picks up when the hero goes in search of the heroine. On the whole, 18 Pages is a romantic drama that has a soul. Despite a few narrative clichés, it’s a satisfactory watch.