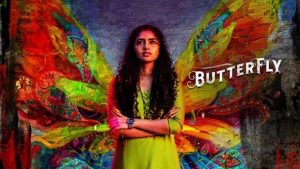 With releasing movies in theatres becoming a tough task, several filmmakers are opting out for a direct OTT release. Another low-budget movie Butterfly featuring Anupama Parameswaran has locked the OTT release on Disney+Hotstar. The movie’s teasers and trailers created interest and let us see whether it lived up to the expectations.

Geetha (Anupama Parameswaran), is a Chartered Accountant by profession and lives with her sister Vyjayanthi (Bhumika Chawla) in Hyderabad. Vyjayanthi, a prominent criminal lawyer, raises children by herself after separating from her husband. As she had to leave for Delhi for important work, she leaves the kids at home and asks Geetha to take care of them. To her shock, the kids go missing. Geetha takes the help of her boyfriend Viswa (Nihal Kodhaty) to find out the whereabouts of the missing kids. Where did the kids go? Were Geetha and Viswa successful in finding the kids? This forms part of the rest of the film.

Missing of twists and thrills

On the whole, Butterfly is another routine crime thriller that can be watched only for Anupama Parameswaran’s performance. Though it’s a thriller, the director failed to make it an engaging watch. Viewers who like female-oriented movies may like it to an extent.