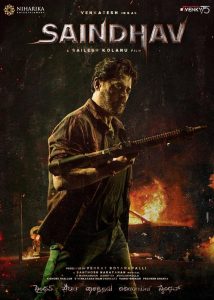 It’s been close to four decades since Venkatesh made his screen debut with Kaliyuga Pandavulu movie and he still enjoys massive stardom despite the heavy influx of young heroes.

The senior actor who was mostly seen in multistarrers in recent years is all set for his milestone movie which will be the 75th film in his career. The makers of the movie had just released the title poster of the movie and going by it, the movie looks like an action entertainer.

Titled Saindhav, the movie is directed by Sailesh Kolanu of HIT fame. The movie’s story seems to be set in a fictional port area named Chandraprahasta. In the title poster, Venkatesh is seen in a rugged avatar with a beard and holding a gun.

The movie will be released simultaneously in all the fourth south languages along with Hindi. Details about the rest of the cast and crew will be announced soon.