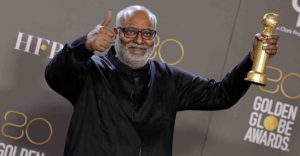 It’s a proud moment for the Indian audience as the track ‘Naatu Naatu’ from SS Rajmouli’s period drama RRR has won the award for ‘Best Original Song’ at the 80th Golden Globes. Interestingly, ‘Naatu Naatu’ is the first Indian song to win a prestigious award.

Also Read: Samantha opens up about her struggles in life

The song was composed by MM Keeravani and sung by Kaala Bhairava and Rahul Sipligunj. The other nominees under the category were Ciao Papa from Guillermo del Toro’s Pinocchio, Carolina by Taylor Swift for Where the Crawdads Sing, the Top Gun song ‘Hold My Hand’ by Lady Gaga, and Rihanna’s ‘Lift Me Up’ from Black Panther.

RRR, now the first Indian film to win a Golden Globe, has also been nominated under the ‘Best Non-English Language Film’. Rajamouli along with NTR and Ram Charan has been extensively promoting the movie in the USA to get as many awards as they have for the movie.

Set in the pre-independence era of the 1920s, RRR is a fictional tale of Indian freedom fighters Komaram Bheem and Alluri Seeta Ramaraju. The lavishly mounted period drama has collected over 1,200 crores in its full run.

Another prestigious award for SS Rajamouli