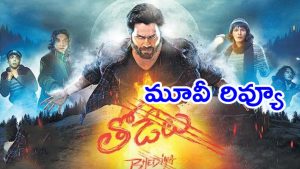 Hindi movies getting dubbed into the south are very rare. Back in the 1990s some of Salman Khan’s movies like Maine Pyar Kiya and Hum Aapke Hain Kaun were dubbed into Telugu and were blockbusters too. After a decades gap, the Hindi makers are dubbing their movies into Telugu and other south languages. The latest to join the list is Varun Dhawan’s Bhediya which is dubbed into Telugu as Thodelu. The trailer was impressive and generated good buzz about the movie. Let’s see what the movie is all about.

Bhaskar (Varun Dhawan) is a civil engineer by profession. He gets a road contract in the remote forest area of Arunachal Pradesh. While he was getting busier with his work, in an unexpected incident, he gets bitten by a wolf. Shockingly, he starts transforming into a werewolf. He is taken to the veterinary doctor Anika (Kriti Sanon) for treatment. Did Bhaskar become a normal human being after the treatment? What kind of challenges did he face due to this? Need to watch the movie to find out these answers.

The movie’s concept is a bit unique. Mahesh Bhatt’s 1990s movie Junoon too had a similar concept where the hero Rahul Roy turns into a Tiger. Star hero like Varun Dhawan doing this kind of movie has boosted the range of the movie.

Varun Dhawan has given one of his best performances in the movie. The movie doesn’t take much time to enter the main plot and the biggest advantage of the movie is the entertainment. The movie has loads of comedy which the audience can thoroughly enjoy.

Despite good doses of comedy, the movie has its flaws too. The film gets slow at places and there are some boring scenes that could have been trimmed. After an interesting first half, the movie goes flat in the second half. The movie becomes routine towards the climax and there’s too much violence which irritates at times.

On the whole, Thodelu is a decent watch if ignored a few flaws. Varun Dhawan, comedy, and plot are the biggest assets of the movie.