Rashmika Mandanna is one of the busiest actresses in Indian cinema. The massive success of Pushpa movie made her a Pan-Indian heroine and she even made her Bollywood debut with the GoodBye movie featuring the legendary Amitabh Bachchan. 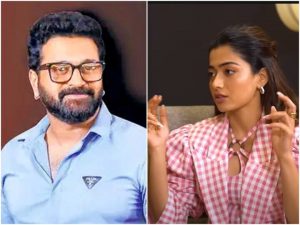 While several directors, actors, and producers are eager to work with her, hero and director Rishab Shetty who recently received a huge blockbuster with Kantara is took a dig at her and said he is in no mood to work with Rashmika Mandanna.

During one of his recent interviews, Rishab Shetty was asked to choose between famous South actresses Samantha Ruth Prabhu, Rashmika Mandanna, Keerthy Suresh, and Sai Pallavi with whom he would like to work on his future projects.

Reacting to this Rishab said, “I decide my actors once I finish my script. I prefer working with newcomers as they come with no barriers.” Rishab further added that he would like to work with actresses like Samantha and Sai Pallavi, he said, “These actors, I don’t like them. But, I like the work of Sai Pallavi and Samantha.”

Rishab Shetty further went on and praised Samantha Ruth Prabhu and Sai Pallavi for their exceptional acting skills and talent. In fact, Rashmika Mandanna made her acting debut with the 2016 blockbuster Kirik Party directed by Rishab Shetty. It was rumored that both Rashmik and Rishab had differences during the filming of the movie, hence Rishabh vowed not to work with her again.