Naga Chaitanya who has been delivering decent hits for the past few years has recently delivered a dud in the form of ThankYou movie. After a brief gap, the young actor teamed up with Venkat Prabhu for the first time for a Telugu-Tamil bilingual movie. The movie’s pre-look poster released yesterday gained massive attention from audiences. 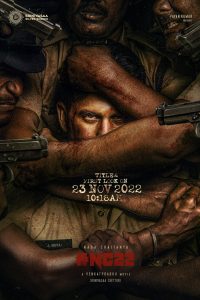 On the occasion of Naga Chaitanya’s birthday, the makers have revealed the title of the movie and it is Custody. An intense poster, which is an extended version of the pre-look poster, has also been released to create hype. Naga Chaitanya’s aggressive look makes the poster look more interesting.

Krithi Shetty is paired opposite Naga Chaitanya for the second time after Bangarraju. Produced by Srinivasaa Silver Screen, the movie has Ilaiyaraaja and Yuvan Shankar Raja as music directors. The movie is expected to have a theatrical release next year.