While a few weddings were anticipated, some come as a surprise to the fans. One such impending wedding which comes as a shocker is that of actress Hansika Motwani. As per the sources, the dazzling diva is all set to enter wedlock soon.

An insider close to the actress says, “The wedding festivities will be held from December 2 to December 4. It will be a destination wedding with only their family and close friends flying to Jaipur.” 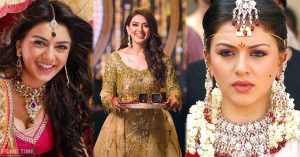 As per the sources, pheras will take place on December 4th evening, with the Haldi ceremony in the morning. December 2 will have Sufi night, followed by Mehendi, and Sangeet the next day. The family will also indulge in a polo match. A casino themed after party is slated for the fourth’s evening. One more interesting this is that every day will have a dress code and theme right from Derby to pastels. The venue of the wedding is Mundota Fort and palace in Jaipur.

While a report states that Hansika is heading for an arranged marriage, a mutual friend reveals that it is actually a love marriage: “Hansika is getting married to her boyfriend, who she has been seeing for a few years now.”

Read: Sidharth getting married to this Heroine?

While the identity of the groom isn’t revealed officially, it’s rumored that Hansika’s beau is Sohael Kathuriya, a businessman from Mumbai. It’s buzzed that both Hansika and Sohael have been friends for some time and are also partners in a firm. Hansika Motwani couldn’t be reached for comment on her impending wedding.